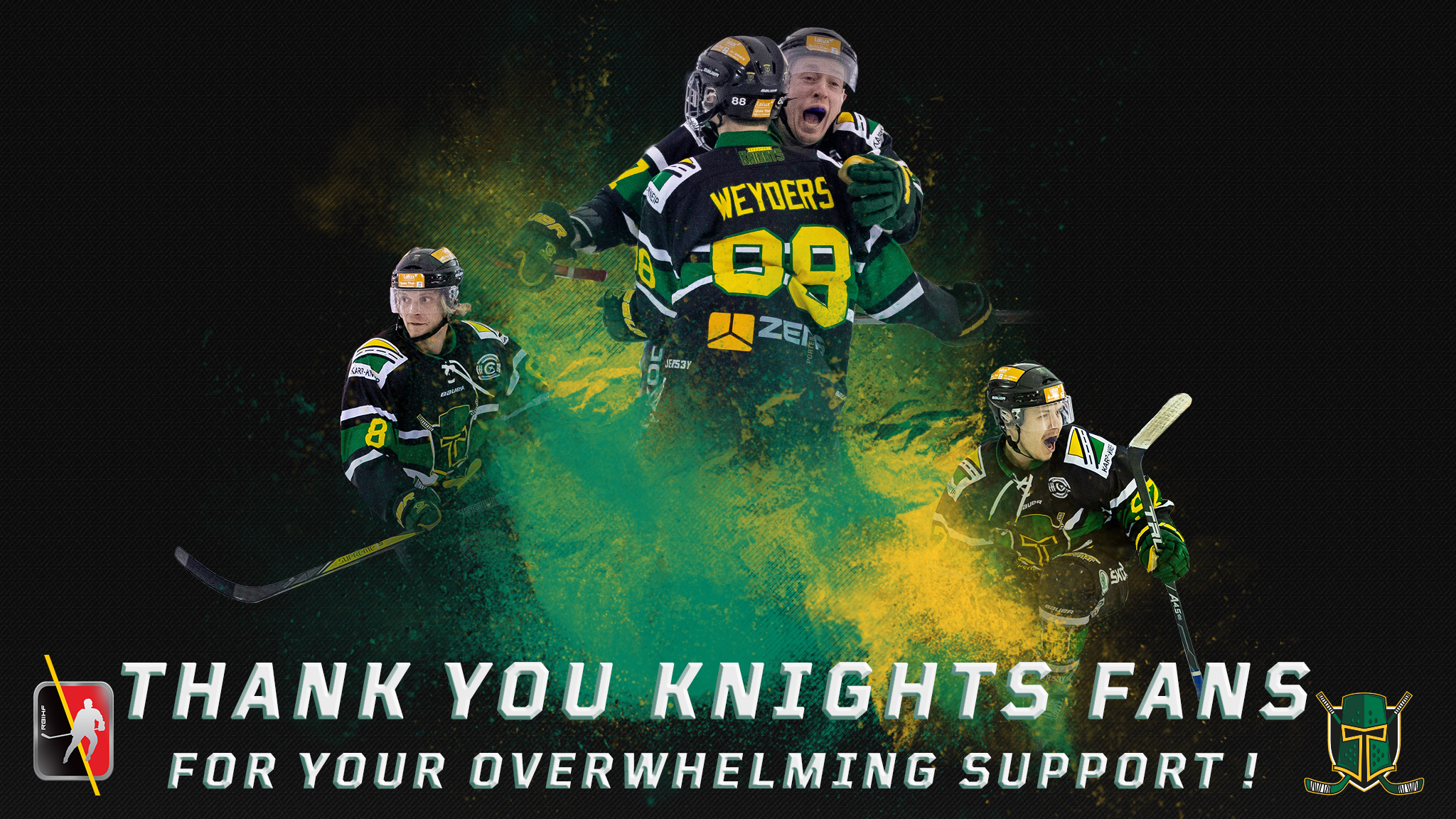 Knights' season over due to Covid-19 pandemic

On Thursday 12th March 2020 the Royal Belgian Ice Hockey Federation (RBIHF) had the unenviable task of informing it’s member clubs, players, staff, sponsors and fans that they have decided to cancel the remaining regular season and playoff games for the 2019/20 Ice Hockey season as a result of the covid-19 pandemic.

A statement released on the official website reads:President Pascal Nuchelmans: “It's a very drastic decision to make, but it has become inevitable because of the news. We take responsibility for the players, coaches and supporters. The BeNe-League, RBIHF and Ice Hockey Netherlands have had intensive contact on this and have decided unanimously that we will stop everything for this season… The Belgian federation therefore also stops all ice hockey and inline hockey competition under the control of the RBIHF… It's really unfortunate, but the health of everyone involved and the prevention of the spread of the virus are paramount, “ says Nuchelmans.

With the cancellation of the season, the Knights quest to win the Belgian 1st division title comes to an unfortunate end. While many will be disappointed by the news we will immediately look to the future as wondering what might have been only slows progress. Progress is the key word for the 2019/20 Beaufort Knights season. Beginning with the facilities at the newly named “Ice Park Beaufort”. Every visitor to the ice park this season will have noticed the construction of a new building located on the west side of the rink. Inside, work nears the final stages of NHL caliber, professional Ice hockey locker rooms for both the home and visiting teams. The building is scheduled to be open in time for the 2020/21 season and will make the experience of visiting Beaufort an exciting and comfortable one for players and even referees.

Other enhancements to the Ice park this season included the installation of temporary risers, increasing the viewing quality for spectators. There was the introduction of the Beaufort Knights Merchandise store which smashed sales records this season. The limited edition “50th anniversary” jersey almost selling out 100 jerseys on the first day in stock! There were more stands to buy food and drinks and the newly constructed roof on the south side of the rink kept viewers dry during the handful of rainy nights.

The overall fan experience was enhanced dramatically in 2019/20 and the attendance records proved it. Adding to 96 season ticket holders at each game were an average of 290 single ticket sales. Adding sponsors and kids who enter for free, and thus weren’t counted to the official number, the total season attendance is estimated at roughly 3,200 Knights fans.

The crowds at the Knights home games were also a huge part of the media success Beaufort experienced this past season. On Facebook, 417 new followers joined since the start of the season to take the overall following to over 2,650. Videos on facebook were viewed a staggering 72,900 times since the start of October with a total watch time of 40,000 minutes or 27.7 days! On Instagram the Knights page grew to over 1,100 followers, who liked 28 posts over 100 times and this past season saw the birth of the Knights LiveStream Youtube channel produced by LDMCEVOY Pictures. The channel grew exponentially over the season ending with over 2,600 unique viewers. The 13 live games combined for 10,500 views and a total watch time of 1,700 hrs or 70.8 days!

The Beaufort fans were treated to intermission entertainment from figure skater Mara Wagner, Kölner Haie mascot Sharky and even inflatable musical chairs. The Knights also made bonds with other Luxembourgish athletes such as Sarah De Nutte (table tennis), Vera Hoffmann (track and field), Dylan Pereira (Motor sport) and Olivier Gorges (triathlon) who performed the ceremonial puck drop. There were also themed nights at the Beaufort Ice Park with Mardi Gras, Teddy Bear Toss and the 50th anniversary of hockey in Beaufort celebration.

The success of the 2019/20 season was not exclusive to the off-ice product of the Beaufort Knights. On the ice, the players performed marvellously. The record books will show the Knights finished in 4th place but a win against last placed Liège in the final game would have clinched 3rd, either way a playoff spot. The Knights ended with 8 wins, 1 overtime win, 2 overtime loses and 4 defeats. They scored 81 goals and goalies Michel Welter, Sven Cruchten and Piotr Swinderek conceded the league lowest 53. The top line of Benny Welter, Mirko Mosr and Sacha Backes all finished in the top 9 of the league scoring charts, Combining for 98 points. The Knights enjoyed a lot of secondary scoring with 19 different players recording at least 1 point. Beaufort were also the least penalised team in the entire league with a total of 61 total penalties for 130 penalty minutes (PIM), substantially less than the league’s most penalised team Kortrijk with 661 total PIMs.

There were big wins against the top teams in the division. Who could forget the 4-3 overtime comeback win against Herentals, the 11-0 hammering of Olympia Heist or the home and away wins over Leuven? After starting the season with 3 straight defeats, the Knights only failed to gain points in 1 of the next 12 . An important stat is that the Knights were never beaten by more than 2 goals. All of this was achieved while reducing the average age of the team to 26.45 years young.

The season may be over prematurely and we’ll never know if the Knights could have gone all the way to a championship win. However, what is important, is that today is day 1 of pre-season preparation for the 2020/21 campaign. The undeniable success of this Beaufort Knights season will never be forgotten, but it’s only just the beginning.